Anna Seacat is studying search engine marketing while pursuing a Masters of Science in Marketing from Southern New Hampshire University.  Connect with her today: @AnnaSeacat.

Both industry experts and members of academe have formed ideas for viral marketing initiatives. Who is right?

When it comes to what specifically makes a marketing initiative go viral, there are many experts in the industry, who offer suggestions based on digital analytics.  For instance, digital analytics firm BuzzSumo analyzed over one hundred million pieces of digital content during an eight month time period to determine what type of content gets shared the most.  From that impressive analysis, the company proposed ten characteristics that makes content the most sharable (Kagan, 2014).

While the researches at BuzzSumo were compiling their study, two different groups in academe were also researching viral content.  Wharton professor Jonah Berger, who has been said to have “made the best attempt to date in researching and defining what characteristics are often found in a viral piece of content” (Ciotti, 2014), developed his STEPPS system.  Berger designed STEPPS as a way to examine the key drivers behind viral pieces of content (Ankeny, 2014).

Meanwhile,  another well-known social scientist, Rosanna E. Guadagno, and a research team from the University of Alabama published her findings about the characteristics of viral content in the academic journal, Computers in Human Behavior.  The title of that study was “Why do Internet Videos Go Viral? A Social Influence Analysis” (Guadagno, Murphy, Okdie, & Rempala, 2014).

As shown in the diagram above, BuzzSumo’s research revealed ten specific characteristics of content that goes viral (Kagan, 2014), Berger’s STEPPS system has established that viral content includes six common factors (2013, p. 23-25), while Guadagno’s academic study showed two commonalities (Guadagno, Murphy, Okdie, & Rempala, 2014, p. 2316 & 2318).  It should be noted that BuzzSumo, as a digital analytics firm, has reliable social sharing data points within its system at any given moment and can efficiently summarize and analyze social trends with that data.  For this reason, its sampling of one hundred million pieces of socially shared content was considerably larger than that of Guadagno, whose study included the reactions of two hundred fifty-six undergraduate psychology students to a small collection of content in a controlled research environment (p. 2314).  Berger’s STEPPS system was the result of his 2012 academic study of 6,956 articles on the New York Times’ homepage (www.nytimes.com).  He and his fellow researcher at the University of Pennsylvania found reoccurring characteristics of the articles that were shared the most (Berger & Milkman, 2012).

Although the research that Berger, BuzzSumo, and Guadagno conducted all focused on viral marketing, the groups disagreed on which emotion(s) is most likely to be evoked through viral initiatives.  Despite the disagreement over specific emotions, their collective work at least pointed to the possibility that viral content tends to evoke emotion of some sort.  Even Guadagno, whose research indicated that content that evokes positive emotions is more likely to be shared than negative content, suggested her respondents showed a clear “preference for negatively valenced videos over the non-emotional control videos” (p. 2316).  Outside of the emotional element of viral content, it is difficult to draw definitive parallels between the bodies of research.  Therefore, to determine which characteristics are the most useful to marketers, I will use the groups of characteristics to analyze a recent viral marketing campaign, which produced significant results in the terms of sales.

A Success Story in Viral Marketing 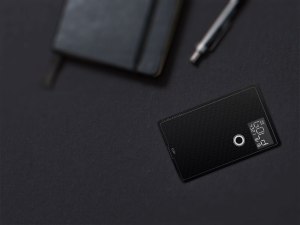 The marketing campaign that launched Coin, an all-in-one payment startup, which was founded in 2013, could be considered viral marketing at its finest.  Not only did Coin’s marketing message about its product-launch spread rapidly online, but the results of the digital campaign were staggering in terms of pre-sales.  “Despite the fact that competition is intense in the mobile payment space” (Aguilar & Riboli, 2013), Coin’s mobile payment system, which is designed to combine all of a user’s credit cards into one credit card, received $50,000 in crowd-funding and was pre-purchased by 1,000 people within 47 minutes of the product’s launch (Roemmele, 2013).

The impressive response to the product-launch has been attributed to two areas of viral marketing: a social media driven referral program and a rich media initiative (Roemmele).  The referral program encouraged early adopters to earn back their pre-purchase fee of $50 by referring members from their online network to a customized URL.  For each referral that converted via the custom URL, Coin gave $5 to the referrer (Roemmele, 2013, Referral Program section).  This social media marketing effort had a noticeable effect on how “pervasively” people promoted Coin within their social networks; according to an article in Forbes, 95% of the links on Twitter and Facebook were referral code links (Roemmele).  And, Coin’s founder told a Forbes reporter six days after the launch that his company had “been mentioned 410,000 times on Facebook since the launch…and people are tweeting about Coin five times a second” (Robehmed, 2013).

Besides the social media driven referral program, Coin also produced a video that became a YouTube sensation.   The YouTube video, which served to illustrate the product features earned over 5.5 Million views in less than a week (Statt, 2013).  As you can see below, to date, that video has received well over 9 Million views.

There is an obvious issue with this example of a viral marketing campaign, when judging it against the aforementioned characteristics of viral content.  That glaring issue is that neither the social networking referral program nor the video was designed to evoke an emotion.  In fact, the video was oriented heavily around the product and its features.  Nevertheless, this viral initiative did successfully incorporate several other characteristics offered by the researchers.

For instance, Social Currency, as described by Berger, is a characteristic that surely has meaning when analyzing why Coin’s content went viral.  Berger explained that viral content often times makes the person who shares the content look in-the-know or smart.  He said, “Just like the clothes we wear and the cars we drive, what we talk about influences how others see us” (2013, p. 23).  If one accepts this concept, it is easy to postulate that those who shared Coin’s referral links throughout social media were aiming to tell their network, “I’m smart and in-the-know about emerging technologies and trends.”  Moreover, it’s important to remember Forbes’ statistic that 95% of the links shared on Facebook and Twitter were referral links, meaning that people weren’t saying, “Check out this website.”  Rather, they were sharing a link that pointed back to a purchase that they proudly made.

Two more of Berger’s characteristics, Public and Practical Value, also can be applied to Coin’s initiative.  Berger’s characteristic that he defines as Public plays on the “Monkey See Monkey Do” principle (p. 23).  For example, because Coin’s initiative gave its customers an incentive to share their purchasing behavior with their social network, it increased the likelihood that those people would do the same.  Berger’s Practical Value driver also applied to Coin’s efforts, because its viral video truly fit the bill of being practical.  As mentioned above, it served as a product and feature demonstration and answers potential questions about security.

Finally, BuzzSumo’s first characteristic, long content, is especially applicable to Coin’s viral video, as it was nearly two minutes long.  Pew Research’s 2012 report on “YouTube & News” found that half of the most popular videos on YouTube were “more than two minutes and 18% were longer than five minutes” (Video Length section, Para. 6).  BuzzSumo explained that longer content tends to be shared more than short and superficial content, because there is less competition and clutter in this space.  In other words, because the average content creator isn’t willing or able to “create in-depth, well-researched” packages, these longer pieces of content stand out (Kagan, 2014, Long Form Content Gets More Social Shares section).  This concept was also proven to be true in an academic research paper that Berger co-authored prior to the forming his STEPPS system.  The research showed that longer articles in the New York Times were more likely to be emailed than shorter ones (Berger & Milkman, 2012, p. 198).

Out of the three groups of characteristics utilized in this discussion, Berger’s STEPPS system seemed to be the best tool to use when attempting to describe why Coin’s social media marketing campaign was shared on a viral level.  Out of the six characteristics that Berger proposed, three were very relevant to Coin’s initiatives.  Meanwhile, none of Guadango’s seemed to be directly relevant and one characteristic from the BuzzSumo list was valuable in analyzing the initiative.  Nonetheless, as a marketing professional, BuzzSumo’s list of characteristics is one that I will continue to refer to as a useful guide when designing sharable content.  In fact, I printed BuzzSumo’s PDF, and it is hanging above my desk.  After all, for many marketers, such as myself, achieving viral status for one campaign is an unlikely objective, whereas designing a steady stream of shareable content is a worthy target for digital marketers.  Therefore, for my purposes, I would most likely create a hybrid list that utilized characteristics from both BuzzSumo’s and Berger’s research, such as the one below. 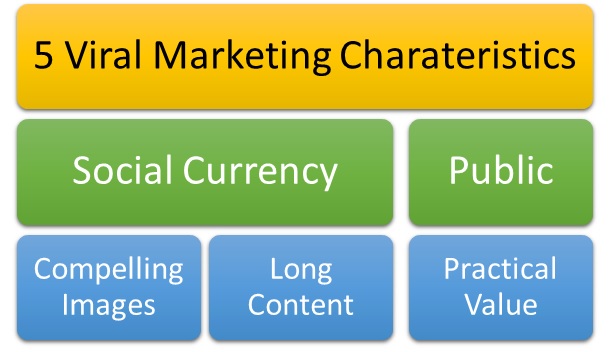 Are you looking for viral marketing ideas? Industry experts and members of academia have compiled lists of common characteristics. | SociallyMindedMarketing.com | Anna Seacat

Only utilizing five characteristics when designing  viral content does seem a bit limiting, especially since different marketing objectives would call for varied tactics.  In the future it is more than likely that I will utilize all of BuzzSumo’s list and keep Berger’s fascinating and meaningful concept of Social Currency in mind.

On the other hand, due to the severe limitations of Guadagno’s research (2013, p. 2318-2319), I have not yet thought of a real-life marketing scenario where I could use it.  Today, many marketers rely on big data to create narrowly focused marketing initiatives. It is doubtful that the analysis of 256 undergraduate students’ responses from one university can be deemed reliable when compared to big data pools, which are readily available to marketers.  Consequently, I cannot imagine any Marketing Director would make a decision or even brainstorm about ideas based on Guadagno’s results.  Unless, of course, that marketer was charged with creating marketing communication that targeted students at the university where the sampling was pulled.

There are many groups, including industry experts and academic researchers, who have attempted to characterize viral content.  However, this comparison of three of those groups and the judgement of their characteristics against a recent and very successful viral marketing initiative showed that marketers might consider utilizing several resources to create a hybrid list of ideas for viral marketing.

Roemmele, B. (2013). Why Was the Launch of Coin So Successful? Forbes. Retrieved from

← Stop Wasting so Much of Your Marketing Budget on Facebook
Reveal More & Give Back: Future Implications of Social Media on Business →

Circle Anna Seacat on Google Plus

some of my favorite photos and their stories